When a controversial politician is found dead of natural causes, Celia and Nick must prove his death came about in a most unnatural way.

"Herriman crafts a finely detailed series debut with a sympathetic protagonist and impeccable, colorful depictions of 1860s San Francisco..."
​     ~ Library Journal starred review of No Comfort for the Lost

"You'll be transported back to old San Francisco as you walk those dangerous streets with Celia Davies, who has dedicated herself to saving lives but ends up seeking justice for the helpless."
~ Victoria Thompson, bestselling author of The Gaslight Mysteries, on No Comfort for the Lost

A Mystery of Old San Francisco 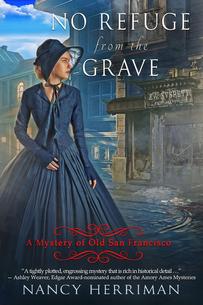 "Well written and absorbing...Recommended for lovers of historical mystery"

Book 3:  No Quiet among the Shadows

Fourth of July festivities are in full swing when a suspicious death reunites Celia and Nick, who must look for answers among the dead to stop a killer among the living.

No Refuge from the Grave

Book 1:  No Comfort for the Lost

When one of Celia Davies’ Chinese patients mysteriously drowns, she fears the crime will go unsolved. Detective Nick Greaves, however, demands justice. Their search for the killer will take them from Chinatown to the Barbary Coast to the city’s gilded parlors. And entangle them both in a potentially fatal conspiracy.

Book 2: No Pity for the Dead

One of Celia's friends comes under suspicion when a buried corpse is discovered on his pro​perty. He will hang for murder if Celia and Nick do not find the true killer.